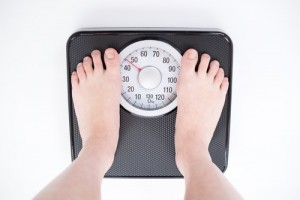 There is no shortage of diet plans or exercise regimes recommended to those who are trying to drop a few pounds, but a new study has found that it may only take a daily weighing to increase weight loss. Overweight men who weighed themselves every day for six months were found to lose almost a stone more than those who stepped on the scales less often.

Researchers from Duke University in North Carolina, U.S., gave dietary advice to 47 overweight men and asked them to weigh themselves daily. Those who checked their weight each day over the six month period lost an average of 1 stone, 6lb. Those who weighed themselves less frequently lost an average of 7lb – a difference significant enough to suggest that keeping such a close eye on the scales can have a real impact in the journey to a slimmer figure.  The results showed that those who weighed themselves five days a week saw similar results to those who did daily weigh-ins, but did not shed quite as many pounds.

The participants filled in questionnaires at both the beginning and the end of the study, giving details about their meals, snacking habits, exercise and other pastimes. Based on their answers, it was clear that those who stuck to the daily weighing were more than twice as likely to snack less and forgo dessert, amounting to an overall reduction of their calorie intake. Interestingly, they also began to spend less time watching TV. The researchers concluded that daily weighing is a way to “trigger the self-regulatory processes that promote behaviour change”.

“As such, recommendations for frequent weighing with an emphasis on daily weighing being optimal are useful for overweight and obese individuals who are trying to lose weight,” they said.

However, Tam Fry of the National Obesity Forum has reservations about advising overweight men and women to check their weight daily, and suggests a weekly check instead. He points out that checking the scales daily may increase anxiety and comfort eating, or cause a fixation on weight which leads to extreme dieting. He says that once a week is enough to “make sure things are going in the right direction”.

Whether weighing themselves once or several times a week, it seems that many overweight individuals could benefit from checking the scales more regularly as a way of motivating them to keep working towards a healthier weight.