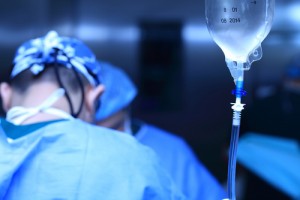 Weight-loss surgery, or bariatric surgery, is becoming increasingly common as a treatment for the morbidly obese whose weight is causing health issues such as type 2 diabetes. However, surgery always has its risks, and the number of possible dangerous side effects associated with existing weight-loss procedures has prompted surgeons to develop a new technique.

An Alternative to Invasive Weight-Loss Surgery

Bariatric surgery most often involves the use of a gastric band to reduce stomach size, or a gastric bypass to re-route the stomach to join a lower part of the intestines. Both procedures result in the recipient needing less food to make them feel full. Both also involve incisions in the abdomen, putting the patient at risk of infection, blood clots and internal bleeding. Following these surgeries, patients must stay in the hospital at least one night, and are often unable to resume normal activities for weeks or months.

The new, alternative technique is called Primary Obesity Surgery Endolumenal. A tube, or endoscope, is passed down the throat and used to gather the stomach into folds, then a stitch is pushed through to hold the folds in place. This method has the same effect as the gastric band and gastric bypass – it shrinks the stomach and makes the patient get fuller faster. Because this technique is less invasive, it carries far fewer risks, leaves no external scars and causes less post-operative pain.

This incision-free weight-loss surgery has been trialled in Europe. In a Spanish study, it was tested on 22 patients and most of them returned to work without any signs of surgery within two to three days. It was found that the procedure caused patients to feel full more quickly, and after a year they had lost 62% of their excess weight, on average.

The technique is now approved for use in the UK and is being tested further in the US, where approximately 300 people are taking part in a new trial.

“This is a very interesting concept and seems plausible,” says Dr Thomas Lavin of the National Obesity Forum. “It is less invasive and more patient-friendly than other therapies, and that is something we really do need. Over the past ten years, there have been a succession of advances in bariatric surgery, and we have moved from the scalpel to the endoscope. This could be a very useful treatment.”