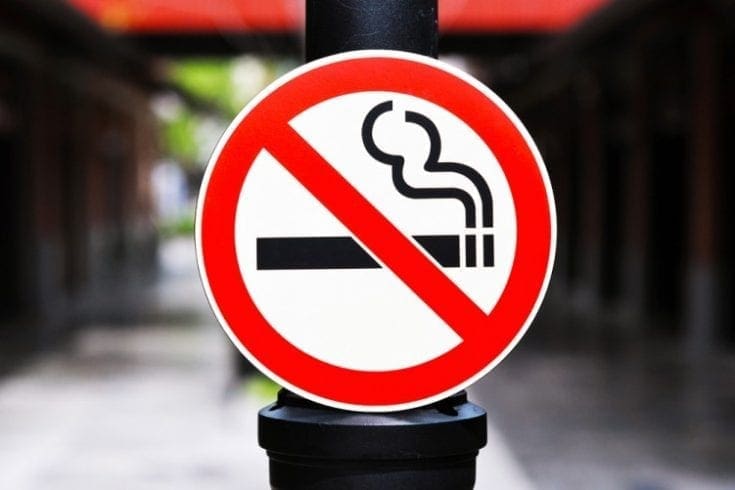 The Royal Society for Public Health is calling for smoking to be banned outside bars, restaurants and several other outdoor areas. Its report says that introducing these ‘exclusion zones’ would encourage more people to quit smoking.

The other proposed exclusion zones include public parks, squares and school gates. The RSPH argues that the 2007 smoking ban inside public places encouraged thousands to quit, and that extending the ban would most likely have similar successful results.

“The introduction of a smoking exclusion zone around bars, restaurants and schools will further reduce the convenience of smoking, and we believe it has the potential to move smokers to safer forms of nicotine, which could ultimately save lives in the process,” says RSPH chief executive Shirley Cramer.

The idea behind the proposal isn’t just to lessen the convenience of smoking but also to change the public’s perception of it. The organisation says that smoking needs to no longer be viewed as normal, and argues that reducing children’s exposure to the habit will make them less likely to take it up themselves.

“Children are hugely receptive to the behaviour of the adults around them,” says Cramer. “We believe that banning smoking in these locations via an exclusion zone could further demoralise smoking, ensuring that it is seen as an abnormal activity and potentially, prevent children and young people from beginning in the future.”

As well advising an extension of the smoking ban, the RSPH is calling for e-cigarettes to be on offer anywhere cigarettes are sold, greater use of e-cigarettes by smoking cessation services, and a new system to license places that can sell cigarettes. The organisation also says that e-cigarettes should be renamed vapourisers or nicotine control products, suggesting that the term ‘e-cigarettes’ is misleading.

Smokers’ rights activists, however, argue that further prohibiting smokers is not the way to encourage quitting.

Simon Clark, director of smokers’ group Forest, says: “Banning smoking outside pubs and bars will discriminate against adults who quite legitimately prefer to smoke. It won’t stop people smoking – it will simply deter more people from going to the pub, and that could lead to even more pub closures.”

He adds that renaming e-cigarettes is a “silly idea”. “It ignores the fact that e-cigarettes are popular because they mimic the act of smoking. The name is part of their appeal.”