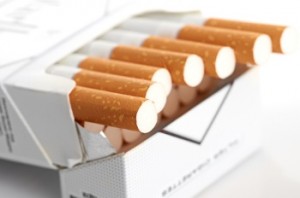 Plain packaging for cigarettes is one step closer to being introduced in the UK after the Government announced it will proceed with a vote that could make it a reality next year. The move will see brightly coloured and slickly designed cigarette packs become illegal, with all packs becoming uniform in size, shape and design, which will include large picture health warnings. This aims to deter people from taking up smoking at such a young age. The UK government’s move will now allow for a vote in the Commons. If passed, a law introducing plain cigarette packaging in England and Wales could come into force in 2016.

Charity Cancer Research UK said it “welcomes” the news, but said it is “vital” the move to standardised packaging happens “as soon as possible.”

Harpal Kumar, Cancer Research UK’s chief executive, said: “We applaud the Government for taking this big step towards getting plain, standardised cigarette packs on the shelves and protecting children from tobacco marketing.

“This is welcome news. It’s vital this announcement leads to a vote on standardised packaging as soon as possible, and certainly before the General Election.

“Two-thirds of smokers start before the age 18, beginning an addiction which will kill half of them if they become long-term smokers,” Kumar added. “By stripping cigarette packs of their marketing features, we can reduce the number of young people lured into an addiction, the products of which are death and disease.”

The news of the move from the government comes nearly three years after initial consultation into standard cigarette packs began back in April 2012. Figures released by Cancer Research UK now show high levels of political support for the move to plain standardised packaging.

The cancer charity said nearly three quarters of voters across the political spectrum supported removing the colourful designs and branding from tobacco packaging, replacing them with packs of uniform size and shape with prominent health warnings.

Government action to reduce smoking rates was also popular, with around 79% of the public supporting action to try and lower the number of young people under 18 who start smoking. The cancer charity said this too was high across the board with 86% of Conservative supporters, 78% of Labour, 90% of Liberal Democrat and 76% of UKIP supporters showing support.

Success with Standard Packs in Australia

Australia, which is a country that has introduced standardised cigarette packaging, is showing evidence that the move is a way to reduce young smokers.

Between 2010 and 2013, the period when standard packs were introduced in the country, Cancer Research UK said Australia saw a 15% reduction in the number of daily smokers aged 14 or older. Data also confirmed that a higher proportion of young people have never smoked, the charity said.