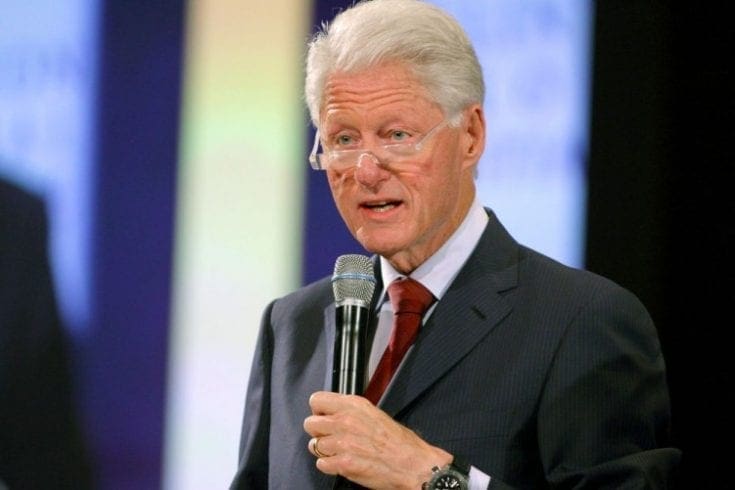 National Heart Month acts as a powerful reminder about the importance of looking after our heart health, and ensuring that we are all fully aware of the symptoms of heart disease and heart attack. It’s common for some people to presume that heart conditions are the sole preserve of elderly people and the medically obese. Certainly, heart attacks are not so commonly associated with celebrities, who are assumed to have the available money to buy the best quality healthcare. Yet, surprisingly, a great number of high-profile people have experienced heart problems, proving that these health issues can affect anyone, regardless of status and age. Here are just seven celebrities who have had problems with their hearts.

Bill Clinton
The 42nd president of the US is perhaps more infamous for his extramarital activities than his health. In office for eight years, he was the third youngest president of the US, so it may come as a surprise to learn that he has had considerable problems with heart disease.

In September 2004, Clinton underwent quadruple heart bypass surgery, and in 2010, he had two coronary stents implanted into his heart. Since then, it has been reported that he has followed medical advice; adopting a vegan diet, while taking up Buddhist meditation. Although reports state his condition can never be cured, his prognosis remains positive, providing he continues to look after his body.

Toni Braxton
American singer Toni Braxton’s most famous hit was Un-Break My Heart; a remarkable coincidence, given that the singer didn’t know at the time that her heart was actually in rather bad shape. At the age of just 36, she was admitted to hospital with severe chest pains; only to discover she had pericarditis; an inflammation of the sac surrounding the heart.

Only four years later, she was then diagnosed with microvascular angina; providing clear evidence that heart disease doesn’t just affect the elderly, or those who are overweight. According to reports, she manages her condition with daily beta-blockers, keeps active and avoids salty foods; choosing salads, vegetables and low-sodium meats instead.

Ranulph Fiennes
Once described by the Guinness Book of Records as “the world’s greatest living explorer”, Ranulph Fiennes may seem like an unlikely candidate for a heart problem. However, in 2003, the explorer suffered a huge heart attack, which is reported to have nearly killed him. Alarmingly, it occurred while he was on a flight and, according to reports, Fiennes said it took “thirteen attempts” to get his heart beating. After three days in intensive care, the explorer underwent an emergency double bypass.

According to reports, Fiennes now manages his health by regularly taking medication, including aspirin and statins to lower his cholesterol and blood pressure. He also focuses on eating healthily and remains vigilant when monitoring his condition, as he is reported to still suffer from “the odd bout of angina”. Astonishingly, he also ran seven marathons in seven months to raise money for the British Heart Foundation; a mere four months after his operation.

Kelsey Grammer
Best known for his lead roles in the hit US comedies Cheers and Frasier, Kelsey Grammer suffered a major heart attack in 2008, at the age of 52. Despite the press initially indicating that the attack was a minor one, Grammer later confirmed that the heart attack had been severe, and had nearly killed him.

However, since the incident, Grammer is reported saying that he felt “thankful” for the health scare, as it helped him to make much needed changes to his lifestyle. He cited stress as the key reason for the heart attack, saying he has made considerable effort to reduce levels of stress in his life, as a result. Grammer was reported saying at the time that it was the “physical manifestation of whatever lesson was being taught to me, which was you better fix it (your life) now”.

Brian Blessed
One of the UK’s best loved actors, Brian Blessed underwent minor heart surgery in 2012, at the age of 75. However, in January this year, during a performance of King Lear, in which he was playing the title role, it was reported Blessed collapsed on stage, causing panic in the theatre from both audience and actors alike.

Remarkably, after being taken off-stage, it is reported Blessed returned; and apologised to his audience, saying: “I feel such an idiot and am not in the habit of doing this, but I have a little fibrillation.” He then proceeded to finish the performance. Director Caroline Devlin described him as a “20 year-old in a 78 year-old’s body”. It was later announced Blessed had “been compelled to withdraw” from the production on the advice of his heart specialist.

Rosie O’Donnell
Rosie O’Donnell is one of America’s best loved comedians. But on one day back in August 2012, it was reported she experienced an aching in her chest, a sensation over her body that felt like bruising, and sore arms. However, she ignored the symptoms, thinking that they were due to overexertion, and simply took an aspirin for the pain.

The following day, it is reported she visited the doctor, only to be told that she had had a heart attack; indeed, the type of heart attack that is commonly referred to as the “widow maker” and can lead to sudden death. Medical experts have suggested it was the aspirin that helped to keep her alive. Since her heart attack, which occurred when she was 50, O’Donnell has been very vocal in urging women to be aware of heart attack symptoms, and to understand that they can happen to anyone, regardless of age.

Looking After the Health of Your Heart
These celebrity examples prove that heart disease and illnesses related to the heart can occur at any time, to anybody; irrespective of how old you are. It’s vital to know the signs and symptoms of a heart attack and to remain vigilant when it comes to your heart health. You should know what course of action to take, should you experience any of the tell-tale signs. For more information, visit Heart Attack – Symptoms on NHS Choices.