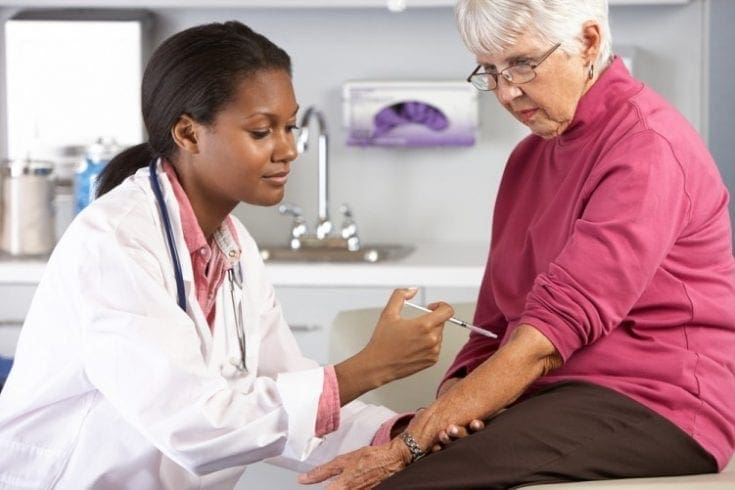 Doctors warn that an alarming number of people are putting their health at risk by shunning their annual flu jab this year. GPs are currently vaccinating significantly fewer patients than they were this time last year.

According to figures from the Royal College of General Practitioners (RCGP), 6% fewer flu jabs have been given at GP practices this autumn, leaving surgery fridges full of unused vaccines. Overall, surgeries are vaccinating more than 100 fewer patients per practice.

“In my practice, we appear to be giving fewer vaccines and have now slowed the ordering of vaccines because our fridges are full,” says Professor Simon de Lusignan, director of the RCGP Research and Surveillance Centre and a GP in Surrey. “The College’s ‘surveillance’ practices are seeing similar results. We took a snapshot of 101 practices and overall they reported an average reduction of 106 fewer vaccines compared with the same period last year.”

Doctors are most concerned for those from high-risk groups who are shunning the jab, which includes elderly people, pregnant women, and people with certain long-term health conditions, such as heart disease or diabetes.

They believe that this year’s low uptake is most likely due to widespread reporting that last year’s jab was ineffective in two-thirds of cases, along with the unusually mild autumn weather.

“These figures are extremely alarming,” says Dr Maureen Baker, chair of the RCGP. “We are experiencing an incredibly mild November this year but we don’t need cold weather for a flu outbreak, and influenza is a horrible illness that can also trigger a host of other health problems. We urge patients not to shun the reminders they receive from the GP surgery and to have their vaccination as a priority. It provides valuable protection and plays a key role in keeping vulnerable people as healthy as possible through the winter.”

Remember, the flu vaccine is given free on the NHS to adults over the age of 65, pregnant women and anyone with a health condition which puts them at risk of flu. You can have the jab at your GP surgery or at a local pharmacy which offers this service.