Can Dogs Help People To Cope With Alzheimer’s? 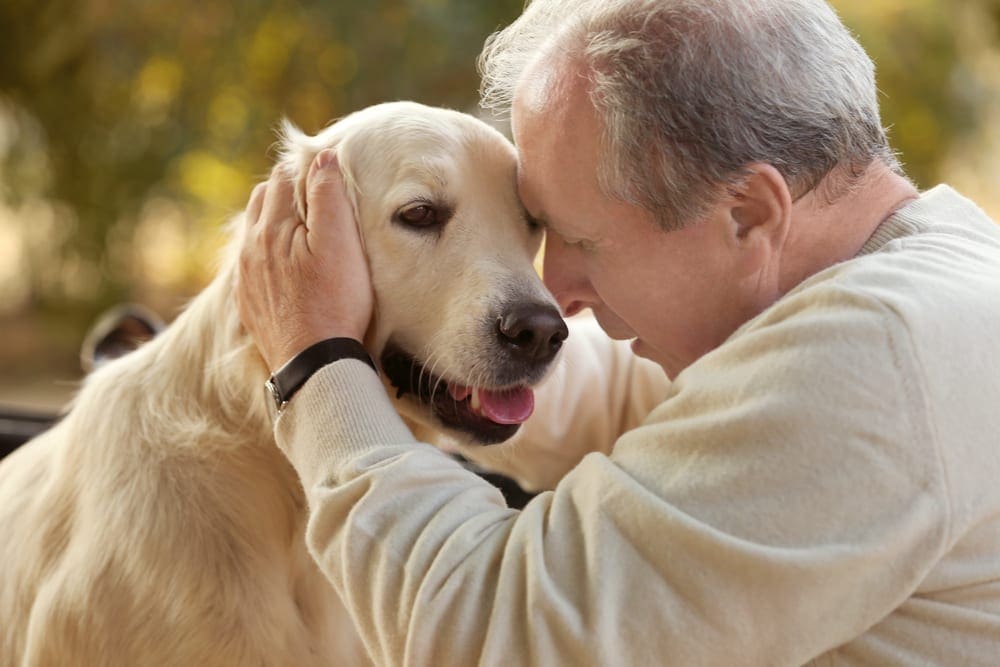 Alzheimer’s disease is the most common form of dementia, affecting almost 500,000 people in the UK. It can cause a great deal of distress, leaving sufferers feeling confused, forgetful and lost, which is not helped by the isolation in which many older people find themselves.
There is an increasing amount of evidence to support the theory that, with the right training, dogs can support people with Alzheimer’s; from helping them to remember when to eat, to tracking them down and guiding them home if they wander too far and can’t remember the way back.

What Dogs Can Do

In a recent experiment by students at Glasgow School of Art, dogs were trained to help sufferers in the early stages of dementia to remember to take their medicine and safely go about their daily routine. Two dogs were trained for 18 months; a Golden Retriever called Oscar and a Labrador named Kaspa. They were taught to respond to alarms, collect medicine, prompt their owners to read reminders and encourage them to get up in the morning.
Ken and Glenys Will have been amazed by the difference Kaspa has made – especially Ken, who has dementia. Glenys said: “Kaspa is the best thing that’s ever happened to us. We can go shopping and the dog will sit with Ken. I don’t need to worry about him. We’re both more relaxed.”
Alzheimer’s is a complicated condition which can affect many aspects of daily life, so it might be surprising to some to learn just how much dogs can help. But according to the findings of the Glasgow study, and another similar project in Israel, dogs can make a huge difference to the lives of people suffering from this debilitating disease.

Alzheimer’s sufferers are sometimes prone to ‘wandering’; leaving the safety of their homes and then being unable to find their way back. Dogs can be trained to guide their owner back to safety when the order “Home” is given. If the patient forgets to give the order, an electronic GPS device in the dog’s collar can be activated. This can help the pair to be found and emits a tone which prompts the dog to take the owner home.
Additionally, Alzheimer’s disease can cause people to confuse day and night and forget the most basic of daily routines. Dogs can guide people through the day, encouraging them to eat or take their medication at the right time. They can even be trained to trigger an alarm if the patient falls and doesn’t get to their feet in a reasonable amount of time.

Dogs can provide people with Alzheimer’s with a companion and friend. They need to be walked every day, which encourages sufferers to get out of the house, take regular exercise and interact with other people. These regular interactions can help to alleviate the sense of loneliness and isolation experienced by many people who have been diagnosed with Alzheimer’s.

Many people with Alzheimer’s are plagued by feelings of helplessness. Having a dog can help them to have a sense of independence. Walking the dog can be particularly helpful because it involves going outside, taking regular exercise and socialising with people around them, which helps to relieve feelings of isolation and depression.

You can read about the training programme in The Bark, by clicking on the link.