BAPRAS Urge People To ‘Think Over Before You Make Over’

Posted by The Best of Health
Categories: Cosmetic Surgery/

According to research, 2 million people in the UK alone are considering, or are already undergoing cosmetic surgery over the next 12 months. In a population of around 60 million, that’s a significant proportion of the country!

There are a number of reasons why people are attracted to the idea of cosmetic surgery. Studies indicate that one of the most significant driving factors is ‘celebrity aspiration’. After having cosmetic treatments, these public figures inspire others to follow their example, in a bid to look more attractive, or more youthful. Social pressure is another key reason, and marketing from clinics also plays a major role.

However, tempting though it is to arrange for a quick nip, tuck and tighten to improve the appearance of your face and body, BAPRAS (The British Association of Plastic, Reconstructive and Aesthetic Surgeons) are taking action, urging more people to make safety their top priority before booking a cosmetic procedure.

The Alarming Statistics of Cosmetic Surgery in the UK

In an extensive study of 6314 people (of which 241 had undergone cosmetic surgery), BAPRAS found that a quarter of those having a cosmetic procedure had not checked the credentials of their surgeon.

A quarter of the men who had undergone surgery felt that they didn’t have a clear idea of the potential outcome when booking their treatment; and 20% of the men (and 14% of the women) were unaware of the risks before receiving the treatment.

In fact, cost seemed to be a bigger priority than safety, with nearly 60% of males and 50% of females citing price as a key factor in their decision. Perhaps unsurprisingly in light of this statistic, over half the men involved in the study reported feeling less confident after their treatment, not more. 31% of women also claimed the same, indicating that their surgery had dented their self-confidence, rather than improved it.

Think Over Before You Make Over 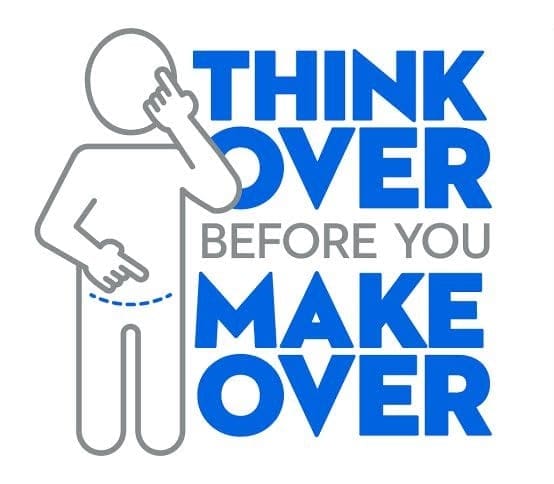 In a bid to encourage people in the UK to make more educated decisions about cosmetic surgery, BAPRAS have launched a campaign, called ‘Think Over Before You Make Over’.

The nationwide campaign is designed to help educate anyone considering cosmetic surgery, alerting them to the facts and risks involved with treatments. A range of free guides are now available online, created by some of the UK’s most experienced, qualified Cosmetic Surgeons.

BAPRAS is not only urging all patients to take their health and safety seriously when booking a cosmetic treatment, but is also urging all clinics and professional bodies to unite with them and support the campaign.

Dr Nigel Mercer, President of BAPRAS and also a Consultant Plastic Surgeon, states, ‘Cosmetic surgery is not something to be taken lightly, and yet thousands of people are putting themselves at serious risk by rushing into major procedures recklessly, without consideration for their own safety. In fact, many people spend more time choosing an electrician than they do a surgeon.’ He adds, ‘we want all these people to read our campaign advice, so they can make informed choices and protect themselves from bad practice.’

Advice to Help You to Stay Safe When Booking Cosmetic Surgery

Alarmingly, many of those who decide to have a cosmetic surgical treatment are unaware whether their surgeon is appropriately qualified or not.

BAPRAS advises that patients request to see the surgeon’s credentials, and also recommend that they check to see whether or not the surgeon is on the General Medical Council’s Specialist Register. They also recommend that you ask plenty of questions before committing to treatment. If at any point you feel in doubt about your safety and wellbeing, avoid having the procedure at that particular clinic and talk to other cosmetic surgeons in the area.

The Think Over Before You Make Over campaign also advises that you:

BAPRAS also encourage surgeries and clinics to display the campaign logo on their website, to raise awareness and show patients that they support safer practice and more informed decisions.

Dr Nigel Mercer concludes, ‘We need an informed and empowered public, able to make active choices; we critically need people to think over before they make over, and we call on everyone to support this vital campaign.’