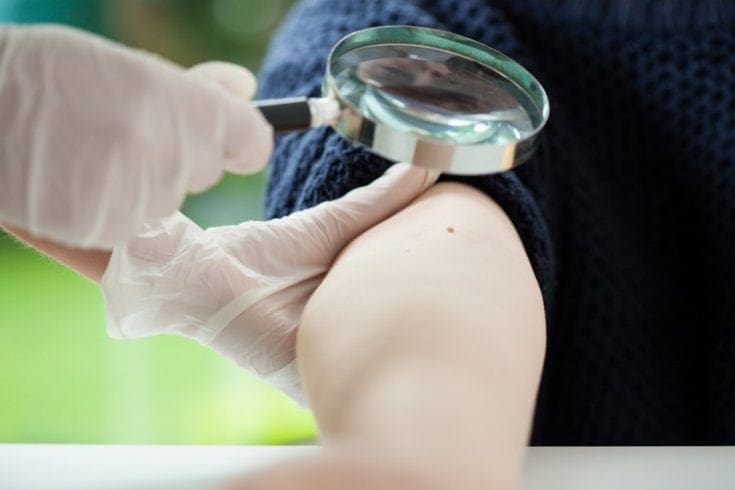 New research indicates that having more than 11 moles on your right arm could mean you have a higher risk of developing skin cancer. The study, funded by the Wellcome Trust, showed that counting moles in a “proxy” body area such as the arm is a good way to assess a person’s risk of melanoma.

The researchers examined data from 3,594 female twins. Specially trained nurses from St Thomas’ Hospital in London performed a mole count on 17 areas of each person’s body, and the results were checked against a further study involving both men and women.

The right arm was found to be most predictive of how many moles were on the entire body. Having more moles on the body is associated with a higher risk of melanoma, so counting moles on the right arm could be a quick and efficient way to determine a person’s risk.

The researchers concluded: “We demonstrated that an arm mole count of more than 11 is associated with a significant risk of having more than 100 moles, that is in itself a strong predictor of risk for melanoma.”

“The findings could have a significant impact for primary care, allowing GPs to more accurately estimate the total number of moles in a patient extremely quickly via an easily accessible body part,” says lead author Simon Ribero, of the department of twin research and genetic epidemiology. “This would mean that more patients at risk of melanoma can be identified and monitored.”

The research was published in the British Journal of Dermatology and highlights how important it is to keep an eye on any moles you have. If you do have moles, you should look out for the appearance of any new ones as well as making sure you’re aware of any changes in the shape or colour of existing moles.

“It’s important to know what’s normal for your skin and to tell your doctor about any change in the size, shape, colour or feel of a mole or a normal patch of skin,” says Dr Claire Knight of Cancer Research UK. “And don’t just look at your arms – melanoma can develop anywhere on the body, and is most common on the trunk in men and the legs in women.”

As we always recommend, if you are at all concerned about unusual skin patches, make an appointment with your GP.