Walking After Meals Could Save Elderly From Falls 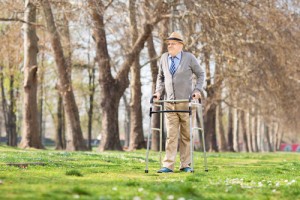 As we age, falls can cause an increasing amount of harm and, for the elderly, can result in a serious injury. Avoiding them is always preferable and, according to new research, an activity as simple as a short walk after meals could reduce the risk of falls in elderly people.

A study conducted in South Australia showed that many falls among the elderly are caused by the dizziness which occurs as a result of post-prandial hypotension – a sudden loss in blood pressure experienced within two hours of eating a meal.

“Although this condition is common in older people, many are not aware of it,” says Professor Renuka Visvanathan of the University of Adelaide, Director of the Adelaide Geriatrics Training and Research with Aged Care (G-TRAC), and Director of Aged and Extended Care Services at The Queen Elizabeth Hospital. “Falls among older people often result in fractures, and those who experience a fall may lose confidence as well as lose their independence. Falls can also be fatal for older people.”

The study was conducted by University of Adelaide student Dr Shailaja Nair and University of South Australia student Zoe Kopsaftis, working under the supervision of Professor Visvanathan and Dr Diana Piscitelli of the University of South Australia. They found that walking a short distance after eating can alleviate the symptoms of post-prandial hypotension, and believe that older people should be encouraged to walk intermittently at a normal pace in order to reduce the fall in blood pressure.

“This advice, coupled with other practical strategies, such as drinking a glass of water with meals, may help older people avoid the consequences of post-prandial hypotension,” says Professor Visvanathan.

“Simple, practical and cheap lifestyle interventions that older people can implement are highly desirable,” she adds. “The results showing that walking can be an effective strategy are pleasing, and will help in better understanding the overall picture of this common problem.”