Universal Flu Vaccine Could Become a Reality in 5 Years 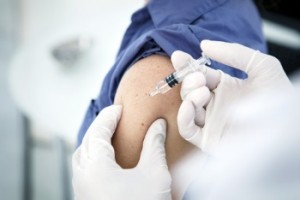 It’s that time of year again when many of us have had that bout of pesky seasonal flu and have quickly regretted not getting our annual flu injection to prevent it. But even if we do, a flu jab may actually not be strong enough to completely fight off that particular seasonal flu virus that’s going around at the time. The truth is, flu viruses are never the same and, experts say, sometimes, a year’s flu injection may not be a good match for that year’s strain of influenza.

But now researchers in Canada and the US have said a universal flu vaccine may be on the horizon, which would be given just once to fight off all strains of flu. Thanks to a recent discovery of a new class of antibodies at McMaster University, Ontario and the Icahn School of Medicine at Mount Sinai, New York, the injection would be capable of “neutralizing” a wide range of influenza A viruses. Further to this, the vaccine could become a reality in the next five years.

Matthew Miller is an assistant professor in McMaster University’s department of biochemistry and biomedical sciences at the Michael G. DeGroote School of Medicine. Miller said unlike seasonal vaccines, which must be given annually, this type of vaccine would only be given once and would have the ability to protect against all strains of flu, even when the virus mutates.

Speaking to McMaster Daily News, he said this would prevent “the occurrence of flu pandemics” and “poor vaccine efficiency.” Miller also said he is “optimistic that a universal flu vaccine could become a reality within the next five to seven years.”

Miller said the results from the study are “very encouraging,” while providing a guide to understanding what vaccine would be best for delivering a universal flu vaccine.

The research was funded by the National Institutes for Health and the Centres of Excellence for Influenza Research and Surveillance in the US.