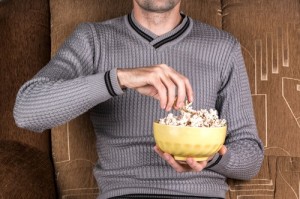 US researchers have found a link between viewing habits and snacking habits, and have revealed that sad films encourage more eating than more cheerful ones. Comfort eating is a common practice and it seems that weepy films could be the source of a significant amount of excess calorie intake.

In a study at Cornell University, a group of office workers watched Love Story and Sweet Home Alabama – one tearjerker and one more light-hearted romantic comedy. They were offered a choice of snacks and were found to indulge more when watching the more emotional film.

“After the movies were over and the tears were wiped away, those who had watched Love Story had eaten 36% more popcorn,” said researcher Brian Wansink of Cornell.

In a further experiment, in which the popcorn boxes from the floors and bins of cinemas were collected and analysed, similar results were found. The researchers calculated that 55% more popcorn was eaten by those watching the heart-rending Solaris than the viewers of comedy My Big Fat Greek Wedding.

Co-researcher Aner Tal deduced that films can “generate emotional eating and people may eat to compensate for sadness.”

This was not Cornell’s first study on the link between eating habits and films. In a previous study they found action films to increase the amount of snacking done by viewers. In this case, those watching thriller The Island ate more than those watching a current affairs show.

The researchers gave a simple recommendation to avoid gaining weight as a result of emotional eating – avoid picking up snacks altogether.

“Keep snacks out of arm’s reach,” said Professor Wansink. “Ideally leave them in the kitchen and only bring to the couch what you intend to eat.”

As an alternative, they advise people to replace popcorn with cut up fruit and vegetables. If viewing habits have the same results whether the food is sugary or healthy, sitting down to a sad film could perhaps help many get through their five a day.