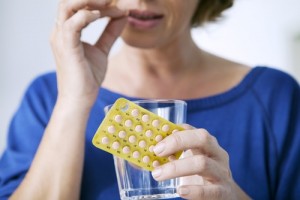 Approximately one million women in the UK use HRT to ease the symptoms of menopause. There has been a lot of research into the possible side effects of the drugs and it seems that there is some uncertainty about the risks and benefits of HRT.

The Cochrane group analysed medical trials involving a total of 40,000 women, aged 50 or over, to examine the effects of HRT. They looked specifically at women taking oral HRT tablets and found that, while the drugs seemed to lower the risk of heart disease, they may have increased the risk of blood clots such as deep vein thrombosis, and possibly the chance of stroke.

The extra benefits of the drugs were found in 9,000 women who started taking HRT before the age of 60 and took it for three to ten years. The researchers deduced that timing was key – women were less likely to develop heart disease or die prematurely if they began taking HRT at the start of their menopause and continued their intake for an appropriate amount of time. Women typically lose supplies of oestrogen during the menopause which can put their hearts at higher risk. The theory is that HRT has the potential to protect against heart disease because it helps to keep oestrogen levels as they should be.

“When we looked at the results according to the age of women, or by how long since their menopause that they started the treatment, we found that if 1,000 women under 60 started the therapy we would expect six fewer deaths, eight fewer cases of heart disease and five extra blood clots over about seven years, compared to 1,000 similar women who did not start,” says lead researcher Dr Henry Boardman, of Oxford University.

While women under 60 were more likely to reap additional benefits from HRT, those who took the drugs many years past the menopause – a use for which it is not intended – became more at risk of the negative side effects. Across the overall age range, a small increase in the risk of blood clots was found and a 24% higher risk of stroke.

Some experts believe that, however small, the risks should be taken into consideration by women who are prescribed HRT.

“This study supports what we already know and indicates a possible increased risk of stroke or formation of a blood clot in some women,” says Maureen Talbot of the British Heart Foundation. “It is important that women have a full understanding of the risks and benefits of HRT and should talk this through with their GP.”

“This is a complicated health issue, where the same treatment offers benefits in some women but harms in others,” says Dr Boardman.

Many experts maintain that HRT is a safe treatment for menopause and that women should not be afraid of the treatment. Janice Rymer, professor of gynaecology and spokeswoman for the Royal College of Obstetricians and Gynaecologists, says that, when it comes to the risks of HRT, “the absolute numbers are very small.”

So far, research into the effects of HRT has produced unclear findings which should be viewed with caution. While associations have been made, more investigation is needed to draw definitive conclusions about the risks and benefits of the treatments. Women who have any concerns about taking HRT are urged to speak to their GP and to have regular health check-ups.