It Is Now Official: It is Healthier To Live By the Seaside 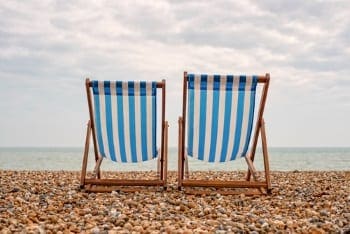 For centuries, the wealthy elite of the UK have taken to the coast to indulge in the bracing sea air, relaxing ambiance and supposedly healing waters. Although we no longer retreat to the shores for our health, it cannot be denied that there’s something refreshing about being by the seaside, and that it certainly does wonders for our mental wellbeing.

Amazingly, in addition to improving the mood, scientists have now discovered that living close to the sea is beneficial to your physical health. According to a recent study published in Environment International, those who live by the seaside absorb greater levels of vitamin D than their inner-city counterparts, and enjoy better health as a result.

Of course, the most effective way to get vitamin D is to be out in the sunshine, and scientists suspect that people living by the coast tend to be out enjoying their surroundings more than those living inland; thus ensuring that they benefit from extra exposure to the sun.

The study, backed by ESF Convergence and carried out at the University of Exeter in partnership with the Met Office, marks the first time in medical history that vitamin D levels have been directly linked with in-depth geographical information. Taking records from over 7,000 people, the researchers grouped participants in terms of their proximity to the sea, whilst also collating considerable information regarding hours of sunlight and other meteorological measurements.

Armed with this information, they then measured levels of the prehormone 25(OH)D in the blood, which is the most common form of vitamin D found in the body. They also took into account other influencing factors, such as hours spent outdoors on an average day, diet and use of UV protection.

The results revealed that levels of vitamin D in those living by the coast were generally higher, and that this was likely to have a significant impact upon their health.

Why Do You Need Vitamin D?

Most people are aware that they need vitamin D, but aren’t sure exactly what its function is in the body. In short, the vitamin serves many vital functions. It helps to regulate the immune system, and also acts as a ‘calcium controller’, ensuring the development of healthy bones. It’s also thought that vitamin D helps protect against conditions such as asthma and eczema.

Although it is possible to get vitamin D from your diet by eating foods such as eggs and oily fish, the most effective way of getting it is from the sun.

Time to Move to the Seaside?

The leader of the study, Dr Nick Osborne, claims that the study ‘provides further evidence that your health is influenced by where you live’. However, before you rush to buy a cosy cottage by the sea, it’s important to remember that sunlight can also have a negative effect on the skin, and that over-exposure can increase the risk of skin cancer.

If you live in the city or miles away from the sea, don’t worry, it’s still easy to get the doses of vitamin D that your body requires. Make sure that you find the time to be outdoors, even if it’s only for a short period each day; and if you’re planning to enjoy a day in the sun, ensure that you protect yourself from the sun’s potentially harmful rays.