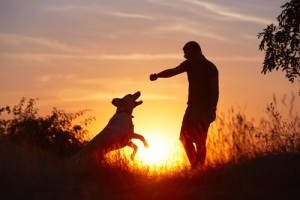 Many of us take great joy and comfort in our pet dogs, but now researchers at the University of Arizona are undertaking a study to try to identify the more concrete health benefits of living with dogs, especially for older people. In particular, they believe that the bacteria harboured by dogs and shared with their human companions might actually be good for us, having a probiotic effect, encouraging the growth of bacteria and microorganisms which are beneficial to the body.

Kim Kelly, an anthropology doctoral student and one of the study’s primary investigators, said: “We’ve co-evolved with dogs over the millennia, but nobody really understands what it is about this dog-human relationship that makes us feel good about being around dogs. Is it just that they’re fuzzy and we like to pet them, or is there something else going on under the skin? The question really is: Has the relationship between dogs and humans gotten under the skin? And we believe it has.”

Under the banner of the University of Arizona’s Human-Animal Interaction Research Initiative, the study will bring together collaborators from the UA Department of Psychiatry, the UA Norton School of Family and Consumer Sciences, the UA School of Animal and Comparative Biomedical Sciences, and the University of California, San Diego.

Their specific aim is to test the effects of living with dogs on the physical and mental health of older people. To do this, they will work with participants who are over 50, and haven’t lived with a dog for at least six months; they will be paired with a dog, to live in their home for three months.

At the beginning of the study, the researchers will collect information on the participants’ gut bacteria, diet, physical activity levels and immune function, as well as measuring the gut bacteria and physical activity levels of participating dogs. These tests will then be repeated after one, two and three months. In this way the researchers will be able to find out specifically if there has been any positive effect on the gut microflora in the humans and the dogs, in addition to looking out for other evidence to changes in participants’ health and emotional well-being which might result from sharing their home with a dog.

“We essentially want to find out, is a dog acting like yogurt in having a probiotic effect?” Kelly said.

In the past, studies have found dog-owners to be happier and healthier, and also to share much of the same gut bacteria with their canine companions. However, we have yet to fully investigate in detail the connection between these factors, and to discover precisely how dogs are helping our bodies.

Dr Charles Raison, principle investigator and UA professor of psychiatry in the College of Medicine explains the thinking behind the study: “We think dogs might work as probiotics to enhance the health of the bacteria that live in our guts. These bacteria, or ‘microbiota,’ are increasingly recognized as playing an essential role in our mental and physical health, especially as we age.”

“We know that not all bacteria are good. We can get very sick from the ‘bad’ bacteria, and modern medicine has done a wonderful job of protecting us from various diseases that are created by these bacteria. But unfortunately, by eliminating the bad bacteria we’ve started eliminating the ‘good’ bacteria, too.”