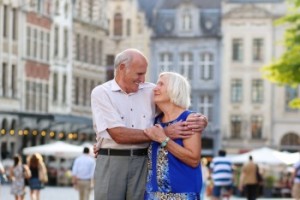 The city, in all its urban glory, with its congested roads, towering office blocks and bright and noisy sights and sounds, was perhaps once thought of as an intimidating and considerably overwhelming environment to live in for the older generation amongst us. But, the truth is, the city is gradually becoming a place people in their later years are calling home.

This year’s Government Office for Science report, People in Cities: the numbers, suggests the number of people in the 75-plus age group living in cities could collectively increase by 8% in the next 50 years. The report, which is part of the UK Government’s Foresight Future of Cities Project, looked at changes in the size of cities and their age structures. This included examining age trends and patterns across 64 UK cities between 2001 and 2011. The findings suggest those cities will tend to track the national aging trend expected over the next 50 years. Key to this is an 8% increase of people aged 75 or over, and a slight increase of people aged between 60 and 74.

The report says: “At the UK level, the main change [if cities follow the national trend] between 2012 and 2062 indicated by the principal projection is a substantial increase in the proportion of people aged 75-plus (up by nearly 8% points), accompanied by a 0.8 point increase in the 60 to 74s and a relative shrinkage of all the younger broad age groups.”

While the pace of ageing in cities is unlikely to be as rapid as it will be nationally, the report goes on to say “cities are very unlikely to entirely escape the major national shift into the 75-plus age group.”

Chris Phillipson, co-director of the Manchester Institute for Collaborative Research on Aging, goes one step further. In his book, Developing Age Friendly Communities: New Approaches to Growing Old in Urban Communities, he says, by 2030, two thirds of the population will be living in cities, and over a quarter of them will be over the age of 65.

The expected rise in the number of older people living in cities has highlighted the importance of them becoming more age-friendly. We can’t ignore the fact that, rather annoyingly, many people do have quite negative thoughts when it comes to ageing populations, with talk of public services groaning under the collective weight of the “past it” older generation, for instance. Such thoughts may paint a picture that the cities of the future, and its people, won’t fully consider the needs of older citizens. There are, however, a number of policy makers, community activists and architects alike, actively involved in demonstrating the potential for cities to be more age-friendly.

At the centre of this and on a global level is the World Health Organisation (WHO) and its Global Age-Friendly Cities project. In a guide about the project, WHO says it aims to “engage cities to become more age-friendly” and “help cities see themselves from the perspective of older people, in order to identify where and how they can become more age-friendly.” In doing so, WHO says it aims to provide the universal standard for an “age-friendly city.”

The project focuses on eight key areas, which together make up the ideal age-friendly city. These areas include transportation, housing and social participation, as well as outdoor spaces and buildings, respect and social inclusion, and civic participation and employment. The other areas are communication and information, and community support and health services.

WHO says the eight areas overlap and interact together. Respect and social inclusion, for example, is reflected in the accessibility of buildings and the entertainment and employment opportunities a city offers to older people. The areas of transportation and communication and information also work together.

“Without transportation or adequate means of obtaining information to allow people to meet and connect, other urban facilities and services that could support active ageing are simply inaccessible,” WHO says.

Age-Friendly in the City

A city’s developments which fit with WHO’s “age-friendly” goals could include: new buildings with sufficient seating and toilets, elevators, ramps and railings; available, affordable and accessible public transport; and well-lit, signposted and conveniently located social and community centres.

Of course, how these broad policy aims for age-friendly environments plays out in the UK will vary from city to city. In many cities local authorities and town planners have older people sitting on or chairing boards, with others leading community programmes, for example. This can only positively encourage an integrated view of older people’s experiences of city life.

Age-friendly cities, in an ideal world, will allow older people to improve their quality of life, while providing a place where they, and people of all other age groups, can happily live together. Although it seems like there may be a long way to go before this goal is fully achieved across the nation, it is reassuring to know that, as more older people comfortably and confidently begin to populate Britain’s cities, making them more age-friendly seems to be both an interest and priority for Government and health organisations alike.