Why a Mediterranean Diet Could Reduce the Risk of Mental Illness 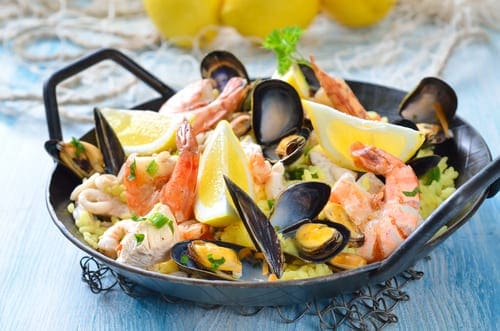 A Mediterranean diet is now being recommended not only for its taste but for its ability to reduce the risk of depression. Including a healthy combination of fish, vegetables, fruit, nuts and seeds, this type of diet has been strongly linked to good mental health in a recent study.

Australian researchers observed the effects of a Mediterranean diet on 82 adults with depression. They looked at the extent to which each participant followed the Mediterranean diet in relation to their mental health and quality of life, which were assessed using the Depression Anxiety Stress Scales (DASS) and the Positive and Negative Affect Scale (PANAS). The results showed lower scores for mental illness to be associated with a Mediterranean diet and suggested that poor eating habits may contribute to the development of depression rather than being an effect of it.

“What we found is that poor diet is predicting the onset of depression. It’s not that people are getting depressed and then eating badly; eating badly causes the depression in the first place,” says lead author Dr Natalie Parletta, of the University of South Australia. “We recruited people who had depression already. We screened out people who had good diet. So it was amazing that there was a significant correlation between the Mediterranean diet and mental illness, even for people with low scores on the consumption of wholefoods.”

She explains that processed foods, red meat and sugary snacks increase blood glucose levels and cause sensitivity to insulin, which can lead to obesity and affect the brain enough to cause mental illness. Contrastingly, nutrients such as vitamin B, vitamin D and healthy fats play a significant role in keeping the brain functioning healthily. Fish’s fatty acid omega-3 has been particularly highlighted as beneficial for mental health.

“The brain is an organ like any other,” she says. “It has higher needs than other organs, from blood flow to delivering oxygen, glucose and nutrients. A lack of blood flow and inflammation can affect the brain as much as any other organ.”

She adds that sometimes depression is biological but, depending on the individual, “a deficiency could be the key link to what is causing mental illness.”

Dr Parletta and her fellow researchers are currently seeking more volunteers in order to continue their research and find out more about the link between diet and mental health.