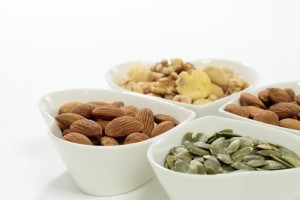 The importance of getting enough vitamin E has been emphasised by a recent study, which has shown how a vitamin E deficiency can cause damage to the brain. Researchers say that such a deficiency disrupts the supply of nutrients to the brain that are crucial to neuronal health.

Conducted at Oregon State University, the study involved examining zebrafish which were fed a diet lacking in vitamin E throughout their lives. Zebrafish deficient in the vitamin were found to have 30% lower levels of DHA-PC – a component of the cellular membrane of brain cells (neurons). Low levels of DHA-PC have previously been linked to an increased risk of Alzheimer’s disease in humans. The vitamin E deficiency was also found to lower levels of lysoPLs – nutrients which are needed to get DHA into the brain and assist the repair of damaged membranes – by around 60%.

“You can’t build a house without the necessary materials,” says lead author Dr Maret Traber. “In a sense, if vitamin E is inadequate, we’re cutting by more than half the amount of materials with which we can build and maintain the brain.”

“Human brains are very enriched in DHA but they can’t make it, they get it from the liver,” explains Dr Traber. “The particular molecules that help carry it there are these lysoPLs, and the amount of those compounds is being greatly reduced when vitamin E intake is insufficient. This sets the stage for cellular membrane damage and neuronal death.”

This study is not the first to show how the brain benefits from getting enough vitamin E. Previous studies have shown a link between increased vitamin E intake and reduced progression of Alzheimer’s disease. There has also been evidence to suggest that vitamin E could help to reduce the brain damage caused during a stroke.

There are plenty of options for those who’d like to increase their vitamin E intake. Some of the best sources of the vitamin include nuts and seeds – such as sunflower seeds, almonds and hazelnuts – and green leafy vegetables, such as spinach and broccoli.