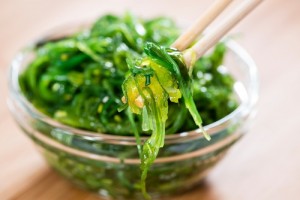 There are plenty of foods that are now labelled as ‘superfoods’, each being hailed as the key to an abundance of health benefits. Chia seeds, blueberries and kale have all had their moments of being the ‘it’ superfood, and now the increasing popularity of kelp, better known as seaweed or algae, suggests that it may be the next big thing.

There is no shortage of reasons nutritionists are recommending kelp as part of a healthy diet. It contains 46 minerals, 16 amino acids and 11 micro-nutrients, and has valuable antioxidant and anti-inflammatory properties.

Kelp seems to have something for everyone. It’s full of protein, making it great for vegetarians. It’s good for pregnant women because it contains a selection of the nutrients they particularly need to be consuming during pregnancy, including calcium, iron, folic acid and potassium. There are even studies exploring its possible link to reduced risk of diseases such as cancer.

Iodine and the Thyroid Gland

One aspect of kelp which is particularly praised by nutritionists is its high level of iodine. Iodine is beneficial because of the role it plays in maintaining healthy thyroid function.

“Kelp has iodine, because only ocean products contain iodine,” says nutritionist Geeta Sidhu-Robb, founder of Nosh Detox. “Iodine nourishes the thyroid gland, the powerhouse of the metabolism. It’s the one thing that most people have out of balance when fatigued.”

“It is a natural source of vitamins A, B1, B2, C, D and E as well as minerals including zinc, iodine, magnesium, iron, potassium, copper and is especially high in calcium,” says Shona Wilkinson, head nutritionist at NutriCentre. “It is also very high in iodine. We need iodine for efficient thyroid and pituitary function. The thyroid is responsible for regulating metabolism and body temperature. For this reason, many people take kelp to help with weight control. Kelp is also known as a natural diuretic and is thought to be good for those troubled with water retention.”

Is Kelp the New Kale?

Kelp is often compared to kale – a vegetable which is also commonly labelled as a superfood. The two contain some of the same nutrients, and it has been suggested that seaweed may replace kale as the latest trendy ingredient to add to your diet.

Sidhu-Robb points out that kelp has the same benefits as kale, and then some, so could happily be consumed instead. However, she also acknowledges that there is a difference between the two, and most experts argue that they play different roles in a diet.

“In my opinion I think kale and kelp both offer something different – kale is grown in soil, whilst kelp comes from the ocean,” says Natalie Alexander, Bio-Synergy ambassador. “I think both are nutritional powerhouses; however, kelp offers more benefits when it comes to assisting our thyroid hormone production, which is responsible for regulating our metabolism.”

A significant factor which might make kelp unlikely to replace kale as a staple for many is that it is less readily available.

“Although it’s a great superfood, it probably won’t take over from kale purely because of availability,” says Rhiannon Lambert, resident nutritionist for Wheyhey. “Kale is everywhere, but kelp has not made the leap to mainstream superfood yet so isn’t as readily available in your local supermarket.”

Is Kelp a ‘Superfood’?

The term ‘superfood’ raises slight debate amongst nutritionists, with some being reluctant to attribute this glorifying title to any food.

“The term ‘superfood isn’t really an official term so it’s difficult to say whether it counts as a superfood or not, but it is certainly a good way of getting all your nutrients in one place,” says Sidhu-Robb.

Other experts are happy to name seaweed a superfood, thanks to its natural antioxidant properties.

“Kelp is definitely a superfood as it has been proven to boost immune system and has natural antibiotic synthesised into it that can help assist the body in fighting infection,” argues Lovisa Nilsson, nutritionist at Lifesum, a health and fitness camp.

Debate about the word ‘superfood’ aside, kelp is certainly packed with the type of nutrients which are typically associated with the term, and its health benefits are receiving increasing amounts of recognition.

“Kelp has been around a while now and if often taken by people ‘in the know’” says Wilkinson. “It is certainly getting more popular with the general public.”

If you’d like to incorporate kelp into your diet, Sidhu-Robb recommends using it in soup, salads or as a flavouring for fish. It can also be added to smoothies as a dried powder. You can also find kelp supplements at most health food and supplement stores.