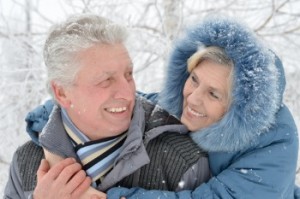 Along with a rather severe drop in temperatures, the winter months in Blighty typically bring with them wind, sleet, snow and, of course, little sunshine. And little sunshine means little vitamin D. Vitamin D deficiency is a common problem for people over the age of 50, but it is one that often goes undiagnosed for people of all ages. In fact, the National Institute of Health and Care Excellence (NICE) estimates that as many as 10 million people could be suffering from a vitamin D deficiency, often without realising what is causing their ill health.

The over 50s are particularly susceptible to vitamin D deficiency as the body starts to become less effective at absorbing and utilising what is commonly called ‘the sunshine vitamin’. This means that even prolonged exposure to sunlight, which would normally boost vitamin D levels, may prove to be ineffective. A reduction in the body’s ability to use vitamin D effectively can lead to a lowering of calcium absorption. This can leave people over 50, particularly women who have already undergone the menopause, at greater risk of suffering from osteoporosis and its effects.

Common symptoms of vitamin D deficiency include muscle weakness and pain, bone pain, a lowering of energy levels, sleep irregularities, lowered levels of immunity and depression. Just this month, US researchers have linked a deficiency of the vitamin to a form of depression called seasonal affective disorder (SAD).

While a mild deficiency of vitamin D might only result in aches and tiredness, more serious cases can lead to a painful arthritic condition in adults called osteomalacia, or soft bones. It can also result in higher blood pressure, some forms of cancer, autoimmune diseases and type 1 diabetes. A US study, carried out by researchers from the Portland’s Kaiser Permanente Centre for Health Research, has also found a link between weight gain and older women suffering from vitamin D deficiencies.

Bring some Sunshine to Your Diet

Obtaining enough vitamin D from the sun in the UK, where, let’s face it, there isn’t much to go round, can be difficult, and especially during the darker winter months. But the important thing to remember is we can get vitamin D to our bodies in other ways besides catching some rays. Deficiencies can, in fact, be caused by simply failing to eat sufficient vitamin D-rich foods.

Eating a diet rich in vitamin D is therefore an effective way of reducing the risk of a developing a deficiency. The vitamin can be found in fish oils and oily fish, such as salmon and sardines. It can also be found in orange juices, margarines and cereals. Mushrooms, beef liver and egg yolks also contain good levels of the sunshine vitamin. So try to get some of these into your daily meals.

As well as foods, people over the age of 50 can benefit from taking vitamin D and calcium supplements to minimise bone loss and the risk of debilitating fractures. In general, people aged between 51 and 70 years need 5mcg or 400 IU of vitamin D every day. Those aged over 71 need 15mcg or 600 IU. But remember, like many things in life, including the sunshine itself, you can have too much of good thing with Vitamin D. Consuming too much of the sunshine vitamin can be toxic, so it is important to try to reach the required levels from foods and supplements, rather than exceed them.