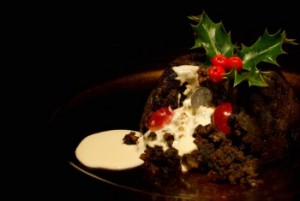 It is a common fact that we tend to eat more over the Christmas period than any other time of the year. In addition to the mammoth three-course plus dinner we devour on the big day itself, there is the office party and the day after day of enormous buffets with family and friends. All this stacks up and we can put on more than 2kg over the festive season. And, once we hit 50, it is harder to rid ourselves of that extra weight. But, fear not. The Best of Health is here to help. Here are five foods best to avoid to stay healthy this Christmas.

Not to sound like a scrooge, but this Christmas classic is a real danger when it comes to gaining weight. A 3oz portion of pudding alone contains around 300 calories and 11g of saturated fat – a huge culprit of increasing cholesterol. While most of us will only ever eat it at Christmas, the tendency is to not just enjoy a slice of pudding after our main meal on December the 25th, but to enjoy portion after portion, until it has all gone, right up to New Year. For a healthier alternative, try stewing some winter fruits with cinnamon and nutmeg. This will not only leave out those excessive sugars and carbs, but will stop any bloating, or that heavy, sleepy feeling we often get after dinner on Christmas Day.

It may add some taste to your Christmas desserts, but lashings of thick cream is a definite no-no. High in calories and full of saturated fat, cream is probably one of the worst foods for clogging up the arteries and piling on the pounds. Instead, try using yoghurt, ricotta or mascarpone cheese as an addition to your dessert for a healthier taste sensation.

Many of us love these alongside out Christmas Day turkey, especially cooked in goose fat to give them that extra taste and crunch. But an average portion of roast potatoes cooked in goose fat can cost your christmas dinner calories count dearly – around 400 calories and 35g of fat. Instead, try roasting your potatoes in olive oil, which is far lower in calories and contains much healthier fats. Better still, combine your potatoes evenly with a much lower carbohydrate starch, such as sweet potatoes or squash to keep those calories down.

Despite being a favourite at buffet parties, where it is tempting to guzzle them down one after the other, sausage rolls are best avoided. They are a combination of overly fatty pastry and usually poor pork sausage meat – the meat in a sausage roll often contains over 50% fat. If you do want to treat yourself to a couple of sausage rolls this Christmas, it is a good idea to make your own. Use high-quality lean pork mince from your butcher and, instead of pastry, use small sections of low-fat wraps to enclose the meat. Brush with olive oil and bake as normal for a crispier and crunchier taste.

Okay, so it isn’t a food as such, but alcohol, at least in excessive volumes, should have a place on this list. Alcohol has an extremely dehydrating effect on the body, raises blood pressure and causes upset to the digestive system. There is no need to be a party-pooper this festive season, just be careful with how much you drink. If you are going to a family or friends’ party over the Christmas period, where plenty of alcohol will be available, it is a good idea to drink plenty of water beforehand. Also, intersperse any alcohol you drink with water throughout the evening. For further information about how best to control your drinking visit: alcoholconcern.org.uk