A Daily Bowl of Cereal Could Mean a Longer, Healthier Life 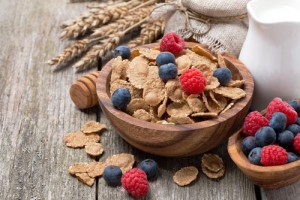 Cereal and porridge lovers will be happy to hear that their choice of breakfast could be adding years to their life. A new study reveals that regular consumption of whole grains and cereal fibres can reduce the risk of a number of common health conditions and significantly lower the chance of premature death.

In whole grains, unlike in refined grains, the bran, germ and endosperm remain – the naturally occurring nutrients of the entire grain seed. Whole grains, such as wheat, oats and quinoa, are generally recommended as part of a healthy diet because they are high in fibre, minerals and antioxidants. The new study provides more details about just how much of an impact they can have on our health.

Researchers at Harvard Public School of Health studied the diets and health of over 367,000 people for an average of fourteen years. They found that those whose diet was high in whole grains were 11% less likely to die from respiratory disease, 48% less likely to die from diabetes and had a 15% reduced risk of cancer. Overall, 34g (1.2oz) of whole grains a day was associated with a 17% reduced risk of premature death. The findings held up even when factors such as age, weight, smoking and physical activity were taken into account.

The team believes that whole grains hold protective properties such as anti-inflammation. Previous studies have shown that they can boost bone mineral density, lower blood pressure and promote healthy gut bacteria. There seems to be no shortage of reasons to make whole grains a staple part of our diets.

“Our study indicates that intake of whole grains and cereal fibre may reduce the risk of all-cause mortality and death from chronic diseases such as cancer, heart disease, diabetes, and respiratory disease,” says lead researcher Dr Lu Qi. “Our findings should motivate future studies, especially clinical trials and experimental studies, to further testify the beneficial effects of whole grains and potential effective components such as fibre and other nutrients, and explore mechanisms.”